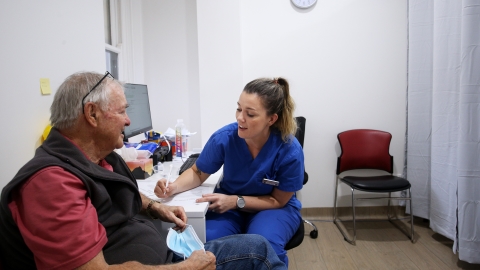 The Australian government has flagged greater freedoms for those who have been fully vaccinated against COVID-19.

Stuart Robert, minister for employment, workforce, skills, small and family business, said on Sunday that vaccinated Australians could be allowed to travel overseas and quarantine at home on their return before the “vast majority” of the population has been inoculated.

As of Sunday morning, there had been 1.48 million vaccines administered in Australia.

Health Minister Greg Hunt has said Australia’s borders could remain closed even after the entire population is vaccinated, but Minister Robert said Prime Minister Scott Morrison has made it “quite clear” that he wants borders open.

“One of the challenges, of course, is if we vaccinate the population, it is voluntary,” Robert told Australian Broadcasting Corporation (ABC) TV.

“We’d hope that the vast majority of Australians would be vaccinated. But if only 80 percent are vaccinated or 90 percent, you would still have 10 percent who are not vaccinated, over the age of 18, and therefore unprotected.

“And that leaves open the opportunity, unfortunately, for COVID-19 to still roll through the community. And that’s just the reality of when people have choices, as they should in Australia.”

Earlier on Sunday, Home Affairs Minister Karen Andrews said “work was well underway” on a plan that would allow vaccinated Australians to quarantine at home on arrival in the country.

“We are looking to open international borders as quickly as we possibly can but the role of the government is to make sure we are keeping Australians safe and secure,” she told Sky News.

“We are working across government, with many agencies, to ensure we are ready and able to support the opening of borders as and when that happens. We will be led by the health advice.”