Doug Ford calls for ban on non-essential travel into Canada 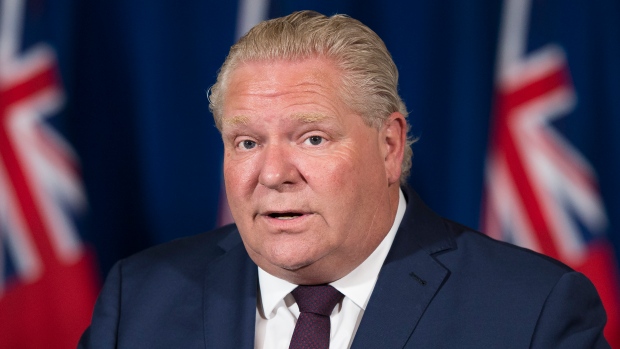 TORONTO —
Ontario Premier Doug Ford is calling on the federal government to close all non-essential travel to Canada as 36 cases of a new COVID-19 variant was confirmed in the province.

In a statement released Saturday morning, the premier called the discovery of the B.1.617 variant “extremely troubling.”

“The images we are seeing from other parts of the world right now are heartbreaking,” Ford said. “These deadly new variants are causing devastation in India and other countries. We can’t let that happen here.”

The B.1.617 “double mutant” variant was first discovered in India in March of this year. Researchers have said that the variant, which has two mutations, has the potential to spread more easily.

On Thursday, Canadian officials said they were imposing a 30-day ban on all commercial and private flights from India and Pakistan as a result of a surge in COVID-19 cases.

The federal government said there were 35 flights that arrived in Canada from India with at least one COVID-19 case on board in the last two weeks.

The day the ban was announced, India recorded more than 314,000 new infections, marking the highest one-day tally of daily COVID-19 cases in the world.

A day later, Public Health Ontario (PHO) confirmed the first cases of the B.1.617 variant in the province. Of the 36 cases identified on Friday, six were linked to international travel and were detected through PHO’s genomic surveillance program.

The other 30 were detected through Ontario’s airport and land border screening programs.

In his statement on Saturday, Ford called for “more action” on Canada’s borders, including a ban on all non-essential travel, something that has only been implemented at the U.S. border.

“We need more action on our borders right now. The federal government must close all non-essential travel to Canada immediately,” the premier said. “The new border measures announced at the end of this week came far too late and don’t do nearly enough to protect Canadians. Without further action, we risk prolonging the third wave, or creating the conditions for a fourth one.”

“We won’t put this pandemic behind us if we can’t get ahead of these deadly variants cropping up around the world. I’m pleading with the federal government to close the border before new variants push us into more lockdowns and another crisis.”

Anyone traveling into Canada must take a COVID-19 test upon arrival and must reserve a hotel for three nights where they can isolate and await their results. The hotel must be booked prior to arriving in the country.

If a traveler receives a negative COVID-19 test, they can continue their 14-day quarantine period elsewhere.

The Public Health Agency of Canada (PHAC) told CTV News Toronto earlier this week that as of April 15, they are aware of at least 211 tickets that have been issued to travelers for not booking a hotel since the quarantine program came into effect in February.